An update on Lauder lass with additional press coverage photos 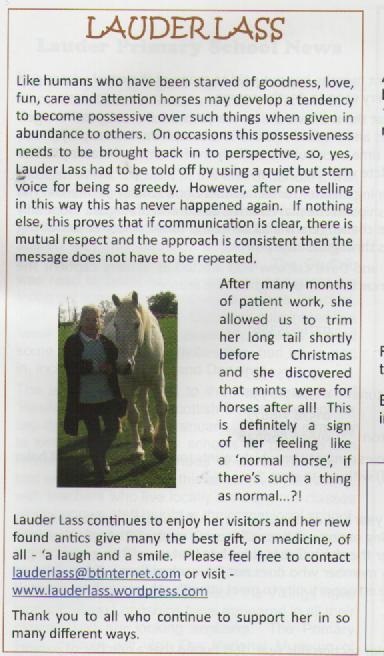 50 50 communication for each other, no matter whether human or animal results in total ‘honest ‘ respect . . . a lesson for us all whether a parent, child, teacher, animal owner, human or animal – try it – it will totally surprise you . . .

The above is from an article in the : Lauderdale News, March 2013 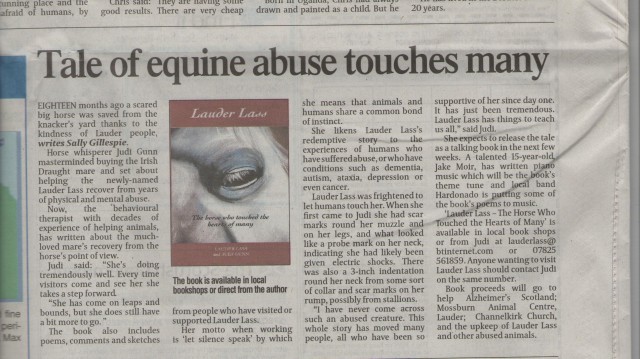 I’m in the background – I thought the furry looking hedge hog of a microphone on a boom was going to eat me up though, but my carer/trainer helped me overcome my fear – thank you and a bigger thank you to Pam Royale for speaking from her heart on my behalf – thank you Pam.

Lauder Lass continues to amaze us with her growing confidence and courage. Her visitors since day 1 continue to visit her and are often moved to tears with the little steps of added confidence and requests that she now, after many hours of patience, has the confidence to make or asks of us. After having had a petrifying period of about 9 years we are all blown away by her wish to try her hardest to trust again. When she suddenly decides to show us another positive step in her tapestry of life it feels as if our hearts often skip a few beats out of sheer joy and delight.

She has her own unique language, like us all I guess. Sometimes ‘traditional horse people’ initially anyway,  find it difficult to communicate with her but always leave by saying ‘ we all take horses, and any animal for that matter, behaviour towards us totally for granted.

The hours spent with her are countless but every single second of those hours have been an absolute joy and delight.

She has totally shown us that we should never give up on something that we deep down believe in although on the surface might think an impossibility, please take this little sentence with you where ever you go and gain courage but more importantly patience  from it.

At the beginning  ‘superficial people’s and a number of professional individuals opinions were – that horse will never come round – destroy her – – but yet, with thanks to our inner strength / ‘basic animal instinct’ and from communicating with her, Lauder Lass’s wish to want to learn how to trust humans again  and to show us that she just needed time and hours of patience to prove that her key to communicate would become unlocked – bless you Lauder Lass you are a perfect example and we hope other people will remember your TRUE story in years to come so that other horses/animals are given the same chance.

For the Queens Jubilee Lauder Lass was invited to Thirlestane Castle (Lauder), however due to the amount of people and the noise from the same a decision was made that we felt it would be unfair on her. However, a suggestion put forward was the question could Lauder Lass cope with holding  an open day at her yard – so that people of all ages could share some time with her and of course her new found friends (this ranged from young ducklings – to young lambs (needing to be bottle fed) and the rest of her horsey friends.

After numerous Union Jacks being hung at the roadside, and placed up high  as a guiders she and the animals completely excelled themselves, showed impeccable behaviour. Every one was guided in to Lauder Lass’s stable, ushered to a seat and one by one came up to stroke her in a way that she could cope with – a tremendous day for her and her visitors. When you consider it took 4 hours for her first ever ‘press photo’ to be taken she really did well, to the point that when her visitors left her stable she stuck her head out, as if to say, and where do you think you are all going, you’ve come to see me not the ducklings or the lambs! – bless her white hairy socks 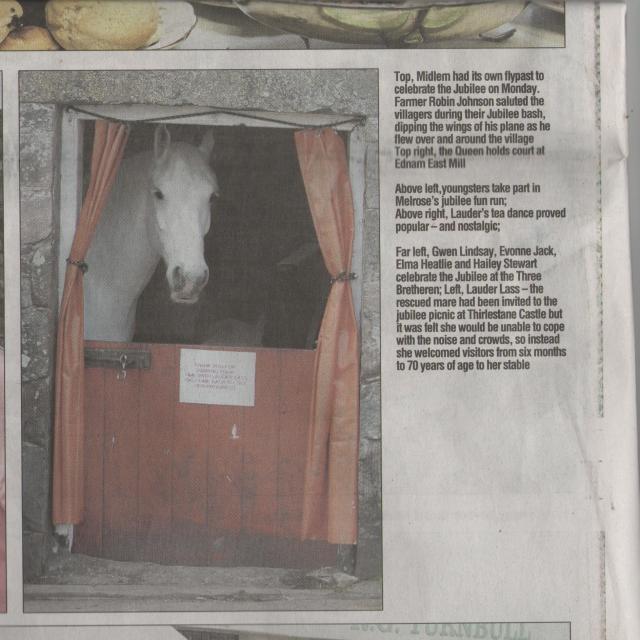 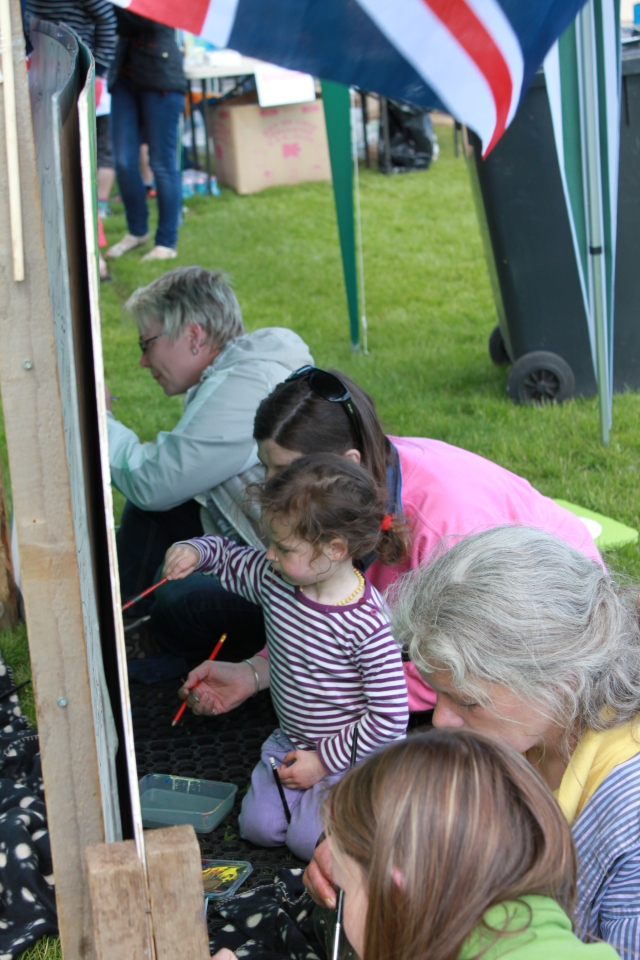 Painted by young and old 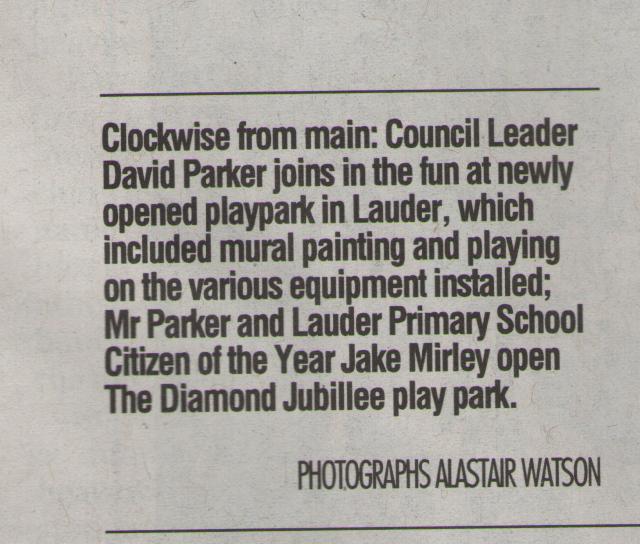 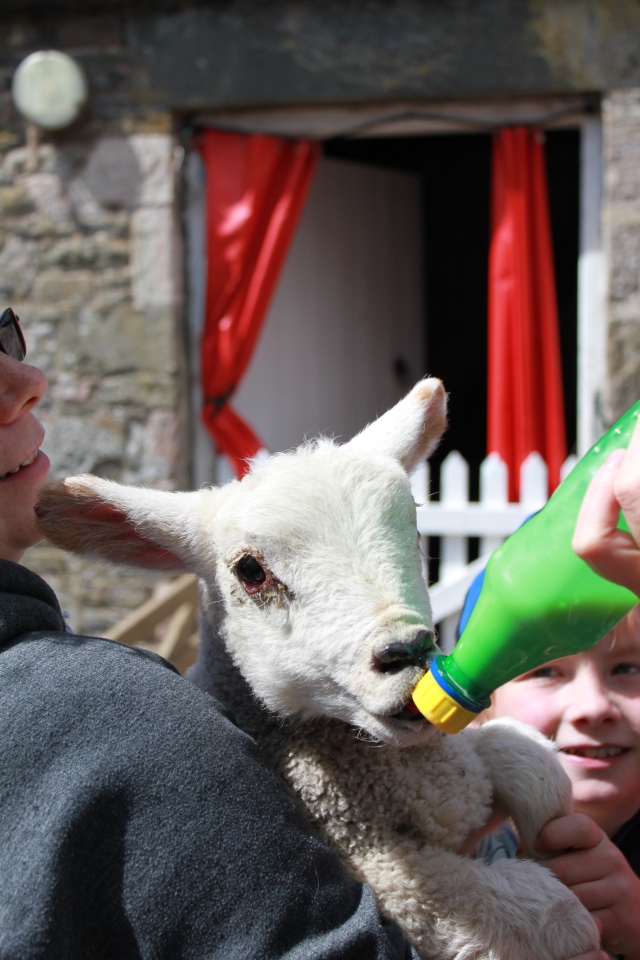 And of course the little furry things that I was jealous of – the people were supposed to be there to visit me!!!!!!

HOW SO VERY LUCKY I AM – THANK YOU ONE AND ALL

An actress phoned the other day to say that she thought my story to date was amazing and that she was going to speak to a couple of film directors who she felt might be interested in my very true story. . . . maybe one day you will all be able to see a film of my humbling story.