Learning how to cope with new suggestions . . .

Like each car has its’ own key, each animal, no matter whether human, horse, dog or elephant also has his or her own key, and unless you can strike the correct method in turning this key or hit the right chord to encourage any living creature to cope with new things then the ability to teach or encourage new suggestions will take forever as well as try the patience of a Saint.

Sometimes, with horses such as Lauder Lass, one of the most important things to learn is constant and consistent repetition but often people lose the patience to carry this through and so readily give in, yet had they just carried on for a further ten minutes or so their wish to teach the animal something new, using 50/50 communication language, but mostly each individuals own language,  would have worked plus it would have instilled further trust between the human and the animal.

Sometimes also, how we are with animals reflects on how we are in the our own world a.k.a the  human world or how we are within our own family unit, sometimes lacking patience, sometimes giving up too soon, sometimes taking things for granted, sometimes being blind and deaf to the smallest of signs (which are in fact extremely important) sometimes not being assertive enough or sometimes being too assertive. Yes, it’s all to do with finding that happy medium or the 50/50 communication language that we often talk about and use on a daily basis whether working or just being amongst animals (humans included in this).

To give your self a wee test, why not try something new, attempt baking some home made bread perhaps a plaited cheese and Chilli loaf, or draw a picture (on a small piece of paper – then you wont be so over-awed by it), or instead of having that instant cup of coffee, why not make some coffee in the old fashioned way (place some ground coffee in a pan, once it starts to pop a bit or gives out that, sometimes, mouth watering smell, add some boiling water – – or does each of these suggestions bring ‘O, I can’t be bothered’ or ‘I know I haven’t got the patience’ well, if this is the case it might just mean that you need to have more patience in certain areas of your life or perhaps even all of it!

So, what has all this got to do with Lauder Lass you may be asking yourself, well, the answer is, if you haven’t got patience to learn new things for  yourself or indeed for others then you will perhaps find it difficult to teach people with anxieties or such a horse as Lauder Lass how to have further confidence in the human race and to cope with individual issues,  or indeed be able to potentially resolve many of the issues that our lives put on our own doorstep.

The other day Lauder Lass was encouraged to learn some new exercises from one of her visitors. Although this took a lot longer than she thought and  brought about some inner frustration from her Visitor she soon realised where she was going wrong . .

Lauder Lass’s visitors last comments were  ‘When I first heard about her and shared time with her I was so frightened of her, probably more than Lauder Lass was frightened of me, but now, I can’t believe that I can do what I do with her now, she is a very very special horse and has taught me so much. I am so pleased that she is now rounded in size and not a bag of bones, but above all it’s wonderful that she has so much confidence in the human race now, well, that is as long as your body language is right’ But I am confused, why was she able to do what  I asked of her from one side  and not the other?, Well, it’s as simple as this ‘ a horse, like many animals need to be taught in exactly the same way from each side of their brain. Sadly many humans think because they have been encouraged to do something from one side that they should just accept the same from the other side, but this, from a horses point of view, is wrong. They need to be shown what to do from both sides in exactly the same way and often in exactly the same amount of time and then anything will work from both sides. So as an example, if you train your horse in the traditional fashion most horses will be happy to be mounted from the near side (left side) but very few accept being mounted from the off side (the right side) unless they have had exactly the same kind of training and the same amount of time spent on the opposite side. 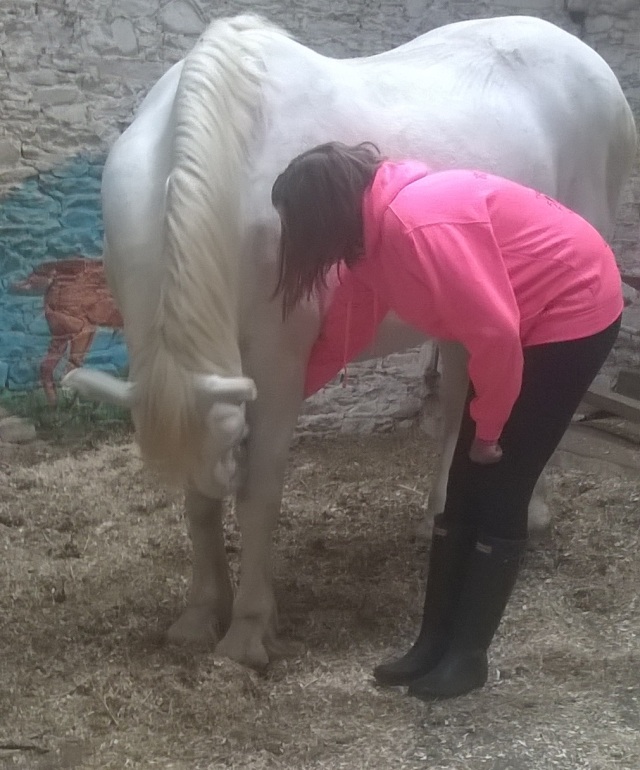 So, the motto in this post is, keep your body language constantly calm and the world will be calm with you and don’t be frightened to push yourself beyond your known comfort zone every so often for this is the only way to reach your dream but above all never ever give up.

About Judi and Lauder Lass's carers

1 Response to Learning how to cope with new suggestions . . .