Resting on a roaster !

Lauder Lass’s choice today was to rest on a roaster!

Lauder Lass, you so deserve to rest on this roaster of a day, and what better a place to lie than next to one of your life sized paintings on YOUR wall in YOUR stable in YOUR field . . . 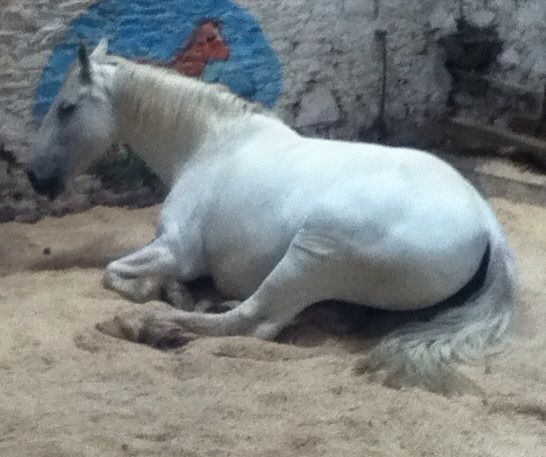 Many of you know the months and months it took to even just touch Lauder Lass all because of the way she had been treated by humans in the past.

If you have read her book you will know already the fear of life she had but that she, like Sunder and Raju the elephants, held on to that small glimmer of hope that her life would, at some stage, get better. It took complete dedication, faith and trust to bring her round when many admitted they would have given up and as suggested by many would have, somehow! have  had her put down!

Her fear and pain ran through us all producing paintings, photographs, video footages as well as tremendous poems from many of her visitors. .  she has set an example to many as to how to ‘treat an animal’ from their point of view and not from the point of view of the human . . she has taught many people how to communicate, how to understand but above all how to listen. She has helped so many people and animals in the process to be understood in their language. Lauder Lass, you are a rock, an anchor for others to have faith in . . you are a gentle  giant, all thanks to the appreciation of your new found kindness. Like Sunder and Raju, you are three of a kind and the gentleness will grow in others thanks to the people who give their hearts and faith in to letting animals be understood for who they are and not for what the human thinks the animal should be . .

Giving animals a voice and a choice is our choice and theirs . . . will you do the same . . . on behalf of many who were never given this chance and passed on long before their chosen time . . thank you.

About Judi and Lauder Lass's carers